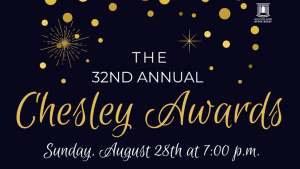 Every year we take an evening to honor the many volunteers, artists, patrons, and sponsors who make each season special. The Chesley Awards program and entertainment will begin at 7:00 p.m. and a celebratory dessert reception will follow in Heritage Plaza. Guests are welcome. There is no charge for the event. No RSVP is needed. Semi-formal attire is requested. Gene A. Chesley (1935-1981) was a highly regarded scenic designer, theatre historian and teacher. Chesley taught in the Dramatic Art Department at the University of California, Davis, from 1963 until his death at the age of 46 in 1981.  As a UCD faculty member, Chesley began an eleven-year project to identify and document extant historic theatres, opera houses and performance halls in all fifty states.  He became a renowned authority on American theatres built between 1800 and 1914, and a strong advocate for the renovation and preservation of theatres.

Gene Chesley’s interest in documenting America’s historic theatres began in 1964 when he noticed a dilapidated local opera house.  “When I first came to the Davis campus, I lived in Woodland for six months.  I realized that the Woodland Opera House was there and the scenery was there too.  Later on, some colleagues and myself made an effort to save the scenery and create some interest.” The Woodland Opera House renovation inspired Chesley’s search for other old theatres in California and then nationwide.